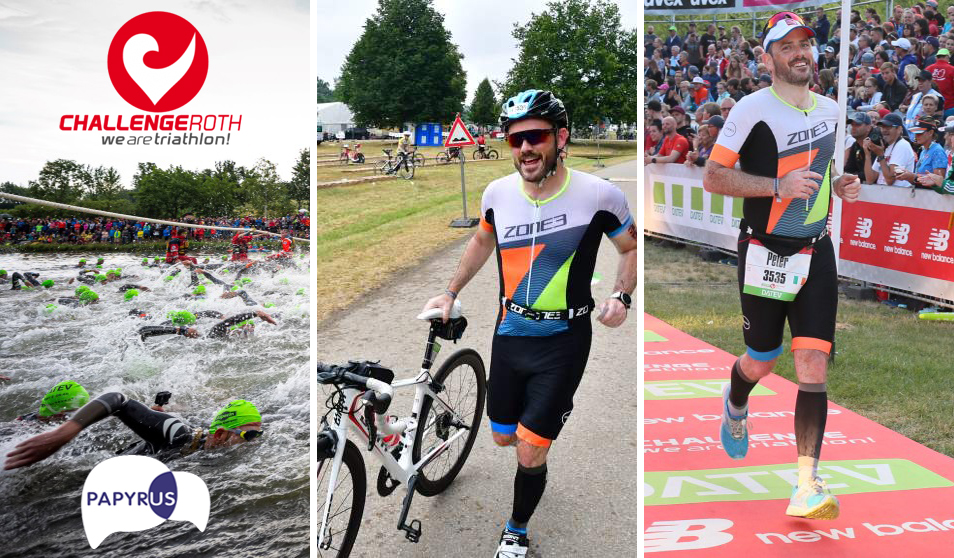 In July 2019, Peter McNulty our IT Director took part in Challenge Roth, a full distance triathlon which was held in Bavaria, Germany.  As well as it being a personal ambition, it provided an opportunity to increase awareness of mental health issues and raise funds for Papyrus, a charity for the prevention of young suicide which is close to his heart.

A few years ago, Pete started running in an attempt to improve his fitness.  During the first few runs he admits that he was sick after just 15 minutes of physical exertion!  The gradual transformation of his fitness however, culminated with him completing the Bolton Triathlon in 2017.

Since January 2019, he has put himself through a punishing regime, training 12 hours a week to prepare for Challenge Roth which would entail swimming 2.4 miles in open water, cycling 112 miles and running 26.2 miles.  This is equivalent to 152 lengths of a regular pool, riding from Birmingham to Southampton and finishing with a marathon!

There were record breaking temperatures across Europe in the lead up to the event, but thankfully it dropped to 24 degrees for race day.  Commenting on the race itself, Pete said “everything was going well on the swim until the 1km mark when I got a whack to the side of the head which knocked my googles off.  After regaining my composure it went ok, although the time was a little bit down on my target. The bike was trouble free and the conditions were almost perfect, apart from a head wind to make the going tough.  The run was much more difficult though, and I suffered with stomach cramps which added around twenty minutes to my time.”

Pete battled through the pain to record a time of 12:26:53, just over an hour and twenty minutes quicker than the Bolton Triathlon.

To make a donation, visit the Just Giving page by clicking here

At the time of writing, Peter has raised close to £3,000 for Papyrus in memory of his nephew Josh Phillips.  Suicide is the biggest killer of young people in the UK, and the charity carry out a number of initiatives and support services which provide hope to youths that are struggling with life.  More information on the charity, including ways to donate can be found on their website: https://papyrus-uk.org/

There is an increasing awareness of issues surrounding mental health, although for many, there is a stigma attached to the issue, which Carnell are keen to break down.  We hope that the promotion of Mindful Employer and Your Support Services, which are available to all of our employees, along with the knowledge that these issues have affected the lives of directors, will enable members of the workforce to speak out if they are experiencing difficulties.