The National Highways (formerly Highways England) press release is below:

A series of woodland skills survival courses which can help young people turn away from violence and crime are taking place thanks to a donation of over £3,000 from teams working on a National Highways scheme in the East Midlands.

The funding will help meet the cost of the courses run by Elite Survival Training which engage young people and help them make positive life choices.

The courses are linked to the Community Initiative to Reduce Violence (CIRV) run by Northamptonshire Police. It aims to work with young people who are involved in, or at risk of becoming involved in, knife crime and/or gangs. Or those who may have been touched by this as victims.

When the initiative came to the attention of teams working on the A45/A6 Chowns Mill Improvement Scheme in Northampton, the contractors came together to donate a total of £3,045 to help with their work.

“This is an incredibly worthwhile cause and we are happy that our scheme has been able to support their work.

“As well as the generous donations from our contractors, we will also be taking the opportunity to talk to the young people about potential future careers and perhaps inspire them to join the highways industry.” 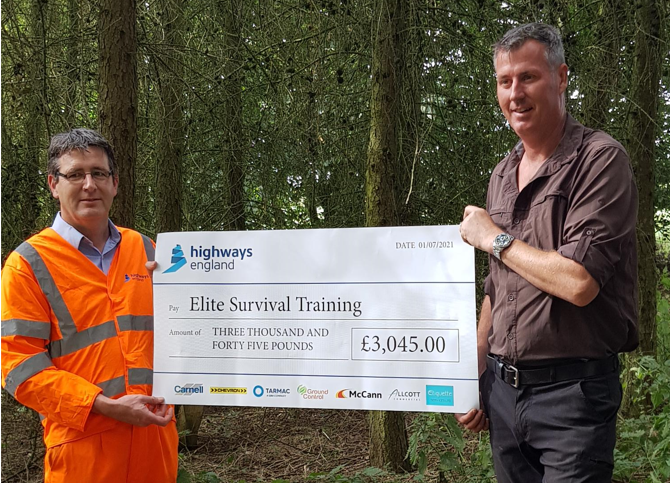 Each of the contractors who sponsored the courses will receive a Social Impact Award Certificate from My Back Yard – the project working with CIRV and the business community to help deliver the initiative.

The donors also have an invitation to attend a session with the young people themselves to see how the funding is benefitting them.

“Money raised to pay Elite Survival Training to run a series of woodland skills survival courses this year has inspired and enthused some of the most vulnerable and marginalized young people in the County, this includes those in or on, the periphery of knife and other crime or who may indeed have been victims of this themselves.

“The outcomes of the courses have included increased self-esteem and self-confidence, with those attending going onto other interventions which have included skills training and access to work trials and jobs.

“All of the Chowns Mill businesses we have worked with becomes a My Back Yard partner and receives our social impact award. We hope to work with these partners again so we can realise other significant social outcomes together.”

Caption: John Sullivan shows the young people how to light a fire

CIRV was successful in Boston and Cincinnati in the US and in Glasgow before the Northamptonshire CIRV project opened. The aim of the project is to work with young people, particularly gang members, to show them an alternative pathway through mentoring, support, job opportunities and other change programmes.

National Highways, formerly Highways England, is investing £24 million to increase capacity at Chowns Mill which experiences severe congestion due to the amount of traffic on the A45 and A6, as well as local traffic accessing Higham Ferrers and Rushden.

The improvements have seen the junction redesigned with a ‘half hamburger’ layout which opened earlier this month and includes a new link road connecting the A6 South and A5028 with the existing roundabout.

The scheme is due to be completed this winter.